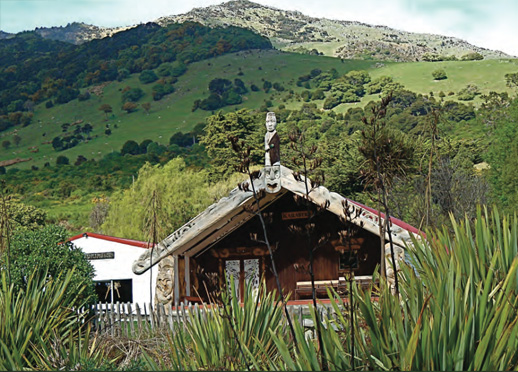 Ōnuku Rūnanga is the modern day representative of the hapū Ngāi Tarewa and Ngāti Irakēhu at Ōnuku, on the shores of Akaroa Harbour.

Ōnuku is home to generations of whānau. It is also of immense significance to Ngāi Tahu as an iwi. It was at Ōnuku on May 30, 1840 where the Treaty of Waitangi was first signed within the Ngāi Tahu takiwā (the first of three signings on Te Waipounamu). It is also where, in 1998, the Crown gave its apology for historical breaches of the Treaty in its dealings with Ngāi Tahu. The marae continues to be a place where Ngāi Tahu come together to kōrero important tribal issues. It is also used by the wider community for wānanga (learning gathering), birthday celebrations, weddings, conferences and retreats. The marae is known for its tranquil surroundings
and the kai that is served to manuhiri.

The takiwā of Ōnuku Rūnanga is centred on Ōnuku and the hills and coasts of Akaroa Harbour to the adjoining takiwā of Te Rūnanga o Koukourārata and Wairewa Rūnanga. Karaweko, a rangatira of the Ngāi Tarewa people of Ōnuku, set out the takiwā of Ōnuku as from the hill top of Pōhatu to the hilltop of Te Ruahine [point at the entrance of Akaroa Harbour] then to Timutimu Head on the west, but that the roadways between the inner and outer bays should always be left open, so other hapū could come and go for mahinga kai and hui.

Under the 1848 Canterbury Purchase the largest block of reserved land set aside for Ngāi Tahu was the Kaiapoi Māori Reserve 873. However, as a result of the land being granted by the Crown, traditional customary rights were uncertain giving rise to a need for title clarity for tribal members and whānau. In response to this need our people decided to establish a tribal council or Rūnanga to determine issues of property and how they would collectively live upon the Reserve. In 1859 the Kaiapoi Rūnanga was established. It was to be the first Rūnanga in New Zealand. The Rūnanga constitution was clear that it was a meeting of land owners decided in common by the people and confirmed under the 1862 Crown Grants Act. Since its establishment the Kaiapoi Māori Rūnanga has often been referred to as the Tuahiwi Rūnanga and latterly as the Ngāi Tūāhuriri Rūnanga as stated in the 1996 Te Rūnanga o Ngāi Tahu Act.

Our whare tūpuna is named Karaweko. Karaweko was a 14 year old warrior when Te Rauparaha attacked Ōnawe in 1832. He and his cousins were captured and taken to Kapiti as prisoners. However, Karaweko was treated more like a whānau member than a prisoner, and was allowed to return to Ōnuku 10 years later, where he took up his roll as the chief of Ōnuku. Wiremu Karaweko [also known as Big William] married Mere Whariu and had 5 children: Hira, Amiria, Hera, Kokone and Hoani. From this whānau descend the whānau that live at Ōnuku today.

The whare tūpuna was officially opened and blessed at a dawn ceremony on February 5th, 1997. It was the first carved house to be built on Banks Peninsula for over 100 years. The Ngāi Tahu paramount ariki Te Maiharanui is represented in the tekoteko of the meeting house. Our wharekai is named Amiria Puhirere, the daughter of Karaweko and Mere Whariu. The wharekai was officially opened in 1990 during Centenary celebrations of the signing of Te Tiriti o Waitangi. Ōteauheke, the ancestral mountain of Ngāi Tawera, rises up behind Ōnuku Marae.

A number of sites in the Ōnuku Rūnanga takiwā are of significance to the history of Ngāi Tahu as an iwi, and to the history of New Zealand in the story of Te Tiriti. Two of these are Takapūneke and Ōnawe. Takapūneke was the kāinga of the Ngāi Tahu ariki Te Maiharanui. Te Maiharanui was captured by Te Rauparaha in 1830, with the collusion of a British sea captain, John Stewart and his brig Elizabeth. Stewart had invited Te Maiharanui on board, where Te Ruaparaha’s war party was concealed. Te Maiharanui was killed, and the kāinga was destroyed. The survivors moved to the next bay south, known as Ōnuku (‘last resting place’). The massacre made Takapūneke a wāhi tapu, and to this day Ōnuku whānau prefer not to venture onto the land where the blood of so many of their ancestors was shed. The Elizabeth affair was the first step in the British annexation of New Zealand that would culminate in the signing of Te Tiriti o Waitangi. Ōnawe is a peninsula at the head of the Harbour. A pā was built on the peninsula in 1830 under the charge of Takatahara, with two other chiefs – Puaka and Potahi, and became the site of a tragic incident in Ngāi Tahu history. In 1832, Te Rauparaha arrived in Akaroa Harbour with fifty waka and waited in the bays adjacent to Ōnawe with his prisoners from Kaiapoi. Knowing that he could not take the well fortified pā, he sent the Kaiapoi prisoners to tell Takatahara that they came in peace. When the gates opened, Te Rauparaha attacked, killing nearly 300 Ngāi Tahu and taking others prisoner. Karaweko was a one of the prisoners taken by Te Rauaparaha back to Kapiti.

Traditionally the whole the Akaroa Harbour was used for mahinga kai, however there are some specific places that Ngāi Tawera used regularly. One of these is the Ōnuku beach front. Whata were set up here to dry tuna and shark. There were cockle, pipi, and pakaka (crab) gathered from other areas of the harbour and eaten on the beach front. At Tikao Bay nets were put across the harbour to Red Point to catch shark, and these would be dried and shared with the whānau.