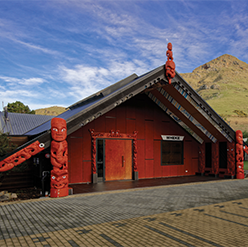 Centuries before Columbus voyaged to the Americas, Tamatea-Pokai-Whenua was exploring Aotearoa. On his trip back north from Murihiku, he stopped off in the hills above Rāpaki. But a southerly storm struck. His party’s fire sticks had gone out, so Tamatea recited the necessary karakia and called to his atua at Ruapehu, Tongariro and Ngaruahoe to send him fire. This they did – though some fell to the ground at Te Whakatakanga-o-te-ngaheru-o-te-ahi-o-Tamatea (Hanmer Springs), it eventually arrived and the evidence can still be seen today at Te Ahi a Tamatea. 1,000 years later Pākeha call that same hill Rāpaki Rock. Nearby, the distinctive cone-shaped hill which dominates Rāpaki is Te Poho o Tamatea.

Tamatea is usually associated with the first peoples in this rohe – Te Iwi Waitaha.

About the beginning of the 18th century, Te Rakiwhakaputa, a Ngāi Tahu rangatira toa of Kati Kuri descent, came up the harbour Whakaraupō – so named by Tamatea after the raupō which was then growing at the Head of the Harbour.

The Kati Kurī / Ngāi Tahu war party fought and defeated the resident manawhenua Ngāti Mamoe at Ōhinehou (now Lyttelton). That battle was marked by naming the hills above Ōhinehou, Ōkete-upoko, a name which was still used in 1849 with signing of the Port Cooper Deed when Ngāi Tahu sold most of the Whakaraupō catchment to the British Crown. Another major battle between Ngāi Tahu and Ngāti Mamoe was at Ōhinetahi, a pa site on the low ridge near the sea to the south of current Governor’s Bay.

The traditional story is that Te Rakiwhakaputa confirmed his take raupatu by casting his rāpaki (waist mat) on the beach and the kaika has ever since been known as Te Rāpaki o Te Rakiwhakaputa. He also more strategically ensured his descendants’ manawhenua rights to this takiwā by marrying Hine-te-a-Wheka with Ngāti Mamoe whakapapa.

Once the main fighting in Whakaraupō was done Te Rakiwhakaputa moved on, but to ensure ahi kaa, he left his son Manuwhiri who built Te Pā Whakataka (near the current tennis courts in Governors Bay).

Another son Wheke settled at Rāpaki and the hapū there has become known as Ngāti Wheke and are manawhenua of the Whakaraupō takiwā. Wheke’s name is also marked by the hill above Cass Bay known as Te Moenga-a-Wheke – or The Great Tor. Wheke maintained a pā at Ōpāwaho near where the rail and road crosses the Ōpawa (ho) river. Ngāti Wheke regard the Ōpāwaho as the northern boundary of the hapū takiwā.

Between 1824 and 1828 Ngāi Tahu was afflicted by inter-hapū warfare. This included in 1826 the fall of Taununu’s specially designed pā for musket warfare at Rīpapa.

The first lease by Pākeha of land in Whakaraupō was in 1846 at Purau by the Greenwoods- shortly afterwards taken over by the Rhodes family. On 10 August 1949 the Whakaraupō/ Port Cooper Deed was signed by Walter Mantell and 18 Ngāi Tahu. For £200 the Crown received 65,000 acres and left Ngāti Wheke with 850 acres at Rāpaki as Native Reserve 875. A Census in 1857 listed 48 Ngāi Tahu living at Rāpaki, 12 in Taukahara and 12 in Purau. 50 years later only the Rāpaki kaika remained.

Community buildings built in Rāpaki were: 1869 the Māori Church; 1874 Catholic Church; 1878 Māori School, 1901 Rūnanga Hall and in 1916 jetty and war memorial ‘Gallipoli’. The school ceased functioning as a school in 1946. The buildings still exist except the Catholic Church which was demolished about 1950. The Hall was replaced with a new Whare Tipuna in 2011. This is a whare whakairo and the carvings, inside and out, represent the whakapapa of Rāpaki and the mana whenua who live there.

Te Hapū o Ngāti Wheke (Rāpaki) is the modern day representative of the hapū Ngāti Wheke. The takiwā of the Rūnanga reflects the events and deeds of Te Rakiwhakaputa and his sons Manuwhiri and Wheke; events and deeds that secured their descendants’ manawhenua rights to the area. The takiwā centres on Rāpaki and the catchment of Whakaraupō and is described in the Port Cooper Deed of 1849 (english translation):