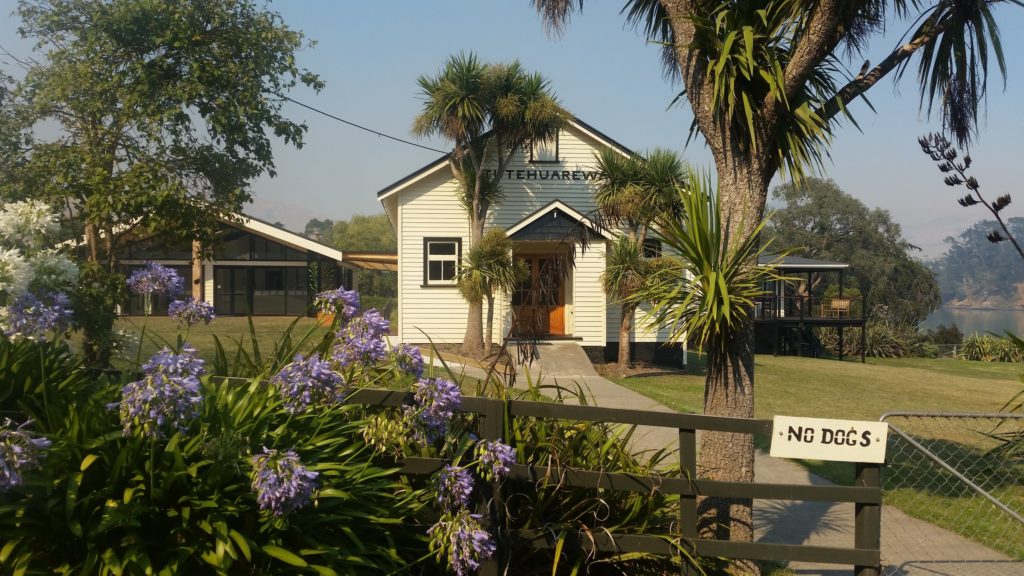 Koukourārata is an ancient place. It has a long history of Ngāi Tahu, Kāti Māmoe and Waitaha land use and occupancy and holds a significant place in tribal history and traditions. The settlement and marae are located on the ancient pā site Puari. The whare tipuna was built in 1923 and named Tūtehuarewa after an ancestor. In 2004 a whare kai was added to the marae buildings, and was named Te Pātaka o Huikai (The storehouse of Huikai) after the eponymous ancestor Huikai. Te Rūnanga o Koukourarāta was created in 1996. The Rūnanga is the representative authority for the hapū Ngāti Huikai and Ngāi Tūhaitara, and the descendants of the original landowners of Koukourārata Māori Reserve 874. The Tutehuarewa Marae Committee and the Poti Riwhi Rūnanga precede Te Rūnanga o Koukourārata. The pēpeha written above is the signature of Koukourārata. It is a mihi that sets out the whakapapa of Ngāti Huikai and identifies the landmarks that encompass the boundary points of the traditional takiwā.

Te Rūnanga o Koukourarāta takes its name from the original kāinga located at the head of the bay, and more specifically the stream flowing there. The origins of the name come from Hataitai, Wellington – the main Ngāi Tahu settlement before crossing over to Te Waka o Aoraki (the South Island). The name recalls the actions of Rakaitekura and her husband Tumaro, also Te Aohikuraki. Tumaro had arrived home after a voyage to find his wife pregnant and was suspicious of an affair. He recited karakia and the names of other chiefs within the pā. When the name Te Aohikuraki was uttered, a baby boy was born. Tumaro then instructed his wife to go and wash, anoint, and dress herself at the sacred waters of nearby stream. These waters have been known as Koukourārata: Koukou = to anoint; Rarata = tame, quiet. The child was named Te Hikutawatawa o te Rangi;
later to become Tūāhuriri.

Koukourārata is important as Horomaka Island was the first landing place of the celebrated waka taua Makawhiua and the Ngāi Tuhaitara war party Te Taua Tuawhiti. Ngāi Tuhaitara came to Te Pataka o Rākaihautu to seek utu upon the hapū of Tutekawa, but also to conquer new lands and re-establish family connections. Tutekawa had killed the two wives of Tūāhuriri in Hataitai (Wellington) and then fled south to be with the people of Kāti Mamoe. Years later the children of Tūāhuriri along with other members of Ngāi Tuhaitara crossed Cook Strait and settled at Kahutara, south of Kaikoura. Moki, one of Tūāhuriri’s sons, learned of the residence of Tutekawa at Waikakahi Pā on the shores of Te Waihora. This ignited old vengeance against Tutekawa and it was Moki that led the utu in honour of his father.

Moki organised the rangatira of Ngāi Tuhaitara and prepared the waka taua Makawhiua. Moki led the war party, and Maka captained the waka. Huikai, the ancestor of the tangata whenua of Koukourārata, was one of the chiefs that sailed with the Makawhiua.

The Makawhiua set sail from Kahutara to Kaiapoi and on to Te Pātaka o Rākaihautū. The waka made first landfall at what was to be named Horo-Maka and Koukourārata. A council of war was held on the banks of what is now Koukourārata. It was during this council that the mauri of Koukourārata was placed in the waters there.

Huikai settled Koukourārata and married his Parakākāriki trophy Te Tawhera. The marriage of Huikai to Te Tawhera is important as this enforces Ngāti Huikai connections and claims to lands on Te Pataka o Rākaihautu. Huikai and Te Tawhera had one son named Tautahi, and this son subsequently took sway of what is now central Christchurch on the banks on the awa Ōtakaro (Avon River). The Māori name of the city – Ōtautahi, means ‘the place of Tautahi’. This ancestral connection gives Te Rūnanga o Koukourārata customary interest in central Christchurch and the Ōtakaro.

The takiwā of Te Rūnanga o Koukourārata reflects traditional concepts of Māori land tenure, following the routes and events of the Makawhiua waka and Ngāi Tuhaitara war party, and enforced again in 1849 by Pukenui during the Port Levy Deed negotiations, when he declared the rights to Kaituna, Waihora and Waikakahi Pā. The takiwā boundaries acknowledge the rangatira of Ngāti Huikai from Kaitara pā on the western side of Ki Te Ara Whānui a Makawhiua (the Ngāi Tahu name for Koukourārata harbour) along the ridgeline to the maunga Te Heru o Kahukura (ancient name for Te Pōhue, or the Monument) and Te Ahu Patiki, and over the Waipuna saddle through Kaituna Valley and along the shores of Te Waihora to Waikakahi, and then inland to the summit along the ridgeline to Pōhatu and along the northern coastline back to Koukourārata.

The modern day Te Rūnanga o Ngāi Tahu Act 1996 description of the takiwā is a shortened version of this, omitting the landmarks that encompass the true boundary points to the shores of Te Waihora.

Ngāi Tuahaitara held undisputed mana whenua over Te Pātaka o Rākaihautū until 1849, when Walter Mantell negotiated the Port Levy Deed of Purchase on behalf of the Crown. Before any reservation was allocated or any price sought for land, the boundaries of the land to be sold had to be discussed and acknowledged.

Pukenui was the chief of Koukourārata at the time of the Port Levy Deed negotiations. After asserting the boundaries of the land in question, Pukenui and others demanded that Mantell provide 1000 pounds and three reserves: at Kaawatea, Pigeon Bay and Koukourārata. These demands were refused, and instead the hapū received 300 pounds and, despite promises that reserves would be ‘large and many’, only one reserve at Koukourārata was given. This meant that the whānau and hapū living throughout the tribal lands in the various bays and harbours had to leave their traditional homes and settle in Koukourārata. For 104,000 acres, Ngāi Tuhaitara/Ngāti Huikai received 1361 acres. This was to be shared among 59 owners (and did not include children).

The 1849 Port Levy Deed of Purchase and map (see map) identifies the traditional landmarks and land boundaries that today are the takiwā of Te Rūnanga o Koukourārata:

“…the inland boundary commences at Kaitara, thence to Te Pohue and along the ridge to Te Ahu Patiki, coming out at Waihora, it comes out at Waihora following the ridge of that mountain to Kuhakawariwari, that is to say by the outer boundary of Nohomutu and his people; the outer boundary commences at Waihora at Waikakahi thence it goes as is shown on the plan hereunto attached till it reaches the sea at Pohatu (Fly or Flea Bay)…”