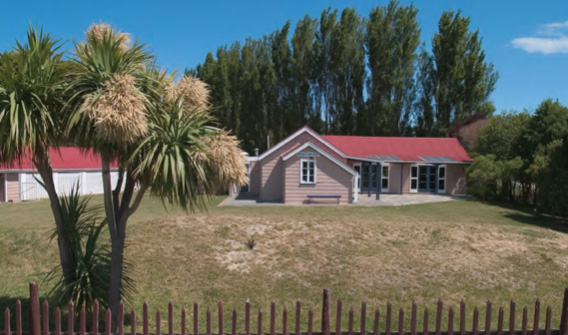 Following the wreckage of Te Waka o Aoraki (the canoe of Aoraki) that became the South Island, Rakinui (Sky Father) sent a number of his mokopuna from the heavens to transform the waka into land that would sustain human life. Among these demi-gods were Tūterakihaunoa whose job was to carve the keel of the upturned waka into mountains and valleys, Kahukura who forested the bare landscape and filled it with animals, and Marokura who carved bays, inlets and estuaries and populated them with fish of many varieties. The mana of Tūterakihaunoa remains to this day given his ongoing residence as the Atua Tiaki (a supreme guardian) for Te Waihora. His resting place at Whakamātakiuru (Fishermans Point) gives the mana to the people of Taumutu as the tangata tiaki for this area. The first people to arrive in the central Canterbury area were those on the Uruao waka under the captaincy of Te Rakihouia. Te Rakihouia had been instructed by his father Rākaihautū to seek out the rich resources of the coastal area (ki tai) while he traversed the mountain regions identifying the resources of land (ki uta).

Te Rakihouia discovered the wetland of Te Waihora that teemed with fish and birds and upon reuniting with his father took him to the lake where Rākaihautū proclaimed Te Waihora as Te Kete Ika a Rākaihautū – The Great Fish Basket of Rākaihautū. Te Rakihouia equally named the coastline of this area as Kā Poupou a Te Rakihouia. Some generations later a Ngāti Māmoe/Ngāi Tahu chief named Tutekawa, who had been embroiled in skirmishes with his chiefly relations in the North Island, came to live at Ōhōkana near Kaiapoi. After a time Tutekawa heard that the eels of Te Waihora were of a better quality so he moved to the shores of the lake and built the pā of Waikākahi.

His son Te Rakitāmau meanwhile built his pā at Taumutu which he named Hakitai. Surrounded by his allies, and at a distance from his enemies, Tutekawa felt quite safe. After many years though his hapū were growing anxious with the rapid southward advance of Ngāi Tahu. They urged the old chief to escape while the opportunity remained but his only reply was “What will then become of the basket of flat fish spread open here?”

Tutekawa was killed when the Ngāi Tahu forces arrived at Waikākahi, and the various chiefs of Ngāi Tahu set out to secure land for themselves. Prior to their arrival on Banks Peninsula a young chief Te Ruahikihiki had received reports about the abundance of inaka, pātiki and tuna in Te Waihora and proclaimed “Tāku kāika ko Orariki” (Orariki at Taumutu is my place), thus placing a tapatapa (claim) on it. Once at Banks Peninsula though, Te Ruahikihiki claimed several places with his first landing at Wainui (Akaroa) where he commenced to dig fern root and cook it. He then passed around the coast leaving his stepson Manaia at Whakamoa, other relatives at Waikākahi, and finally took up his permanent residency at the pā of Orariki, Taumutu. The ahi kā of Ngāi Te Ruahikihiki remains at Taumutu to this day, and together with the residence of Tūterakihaunoa at Whakamātakiuru, instils the primary responsibility of kaitiaki for Te Waihora. However, in this role our hapū recognises the surrounding hapū of Te Pātaka o Rākaihautū and Kaiapoi whose rights extend to the lakeshores.

Ngāti Moki Marae is located at Taumutu, on the quiet shores of Te Waihora at the southern end of Kaitorete Spit. The background roar of the ocean is ever present as waves break onto this narrow spit that separates Te Waihora from the sea. Taumutu means the end of a ridge, or a high ridge. The name may also be a shortened version of Te Pā o Te Ikamutu – a traditional site in the area. The swampy environs of Te Waihora including Waiwhio (Irwell River), Waitātari (Harts Creek) and Waikekewai provided the prime environment for tuna (eels), pātiki (flounder), kanakana (lamprey) and waterfowl such as pūtakitaki (paradise duck). This bounty provided for those living at Taumutu but also afforded them a ready currency for bartering with other hapū all over the South Island.

The lake as a mahinga kai (food source) has always been a defining aspect of marae life at Taumutu. The following whakatauki encapsulates the significance and abundance of these food resources:

Despite the decreasing population at Taumutu during the late 1800’s, a new meeting hall was built and officially opened on 7 May 1891. It replaced an earlier structure that had stood on the same site. The hall was named Moki after the tipuna whose original historic pā had stood on the same ground. Moki has undergone extensive modernisation and additions over the years and so bears little resemblance to its original 1891 form. Since the 1980’s there has been a gradual resurgence in the Ngāi Tahu population at Taumutu, with the marae being frequented for monthly Rūnanga meetings, as well as wānanga, whānau events, school visits and other hui. More people are becoming actively involved in the marae that is a favoured spot for wānanga and educational hui.

Te Taumutu Rūnanga has invested much time and energy in restoration of the riparian margins of the two streams that meet up at, and run past, Ngāti Moki Marae into Te Waihora. A bridge has been constructed and a walkway is planned to link the two old pā sites and provide easy access from the marae to the church and urupā. This work has resulted in the return of many native plant species and it is hoped that the rejuvenation of native bird, fish and insect species will follow. Ongoing concerns about the preservation of and respect for these resources are central to the work of Te Taumutu Rūnanga today.

The pā of three heroic Ngāi Tahu tūpuna – Te Rakitāmau, Te Ruahikihiki and Moki II – were established at various times at Taumutu. Te Rakitāmau’s pā Hakitai was situated near the traditional opening of Te Waihora to the sea. This pā site has now been reclaimed by the sea. Orariki (the place of chiefs), the pā of Te Ruahikihiki, and Te Pā o Te Ikamutu (the village of the backwash of the fish) were built on a narrow section
of land between the edge of Te Waihora and the sea where the Hone Wetere Church now stands. These pā together with Te Pā o Moki (the pā of Te Ruahikihiki’s son Moki) were built on strategic and defensible sites that were once surrounded by swampland. Earthwork remains associated with these pā are still visible at Taumutu today. The present day Ngāti Moki marae is built on the site of Te Pā o Moki.

A place of occupation for over 600 years, Taumutu has a longstanding cultural history and has been the site of much
archaeological interest for this reason. Borrow pits are visible in the paddock across from the marae. These large
depressions in the ground are the result of the removal of earth for use in what are considered to be some of the
southernmost kūmara gardens in the South Island. The 19th century saw the kāinga at Taumutu embroiled in
the turmoil of the Kai Huaka feud from 1825-28. The kāinga was then doubly threatened by Te Rauparaha’s invasion of
the south and the arrival of increasing numbers of European farmers and fishermen. European immigrants worked to harness the bounty of the lake and develop its surrounding lands into pasture.

Ngāi Tahu influence in the area was rapidly eroded culminating in the 1848 Kemp Purchase that saw much of the land at Taumutu passing out of Ngāi Tahu control. Despite Ngāi Tahu reserving Te Waihora from sale, exploitation of the lake and its resources continued and the European presence led to the population at Taumutu being in serious decline by the end of the 19th century.

The takiwā of Ngāi Te Ruahikihiki centres on Te Waihora and extends west across central Canterbury to Kā Tiritiri o Te Moana (The Southern Alps). Travelling south from Taumutu you encounter Muriwai (Coopers Lagoon), another important mahinga kai site – renowned for a special variety of eel that were provided to manuhiri (guests). Further south are the ancient kāinga at the river mouth of the Rakaia River. These sites contain evidence of some of the earliest wharenui and wharekai structures in the country, but are threatened by current day hut settlements and coastal erosion. Travelling further down the coast is Hakatere (Ashburton River) and the boundary between the Taumutu and Arowhenua people.

Turning inland, the wāhi taonga of Hinepaaka is situated near Alford. This site was the name of a sole majestic matai
tree that stood as a marker and symbol for those travelling across the Plains and was named after the grandmother
of Te Ruahikihiki. Although the original tree was felled by wind many years ago, a new tree was planted in its place by the kaumātua of Taumutu, Arowhenua and Tuahiwi. Entering the mountains, place names associated with Te Ruahikihiki, Te Rakitāmau and their descendants can be found. Several of these occur in the Waitāwhiri (Wilberforce River) associated with the pounamu trails through to Te Tai Poutini.

Returning to the foothills, visible from Te Pā o Moki, sites such as Tūtepiriraki (son of Tutekawa and brother of Te Rakitāmau) and Nuku Mania – a maunga cited by the people of Taumutu, can be located adjacent to where the Waimakariri river emerges from the gorge. Returning to Te Waihora, the numerous waipuna (springs) are important sites for mahinga kai and other tikanga (practises). Of particular note is Te Waiwhakaheketūpapaku – a spring head water burial site in which many significant tupuna are buried. Te Kuaowhiti, Waitatari, Waiwhio, Te Raki and Tūtakahikura are all important sites along the western lake edge. Waikirikiri, with its many pā tuna (eel weirs) and Ararira are two of the larger freshwater inflows to the lake. Huritini, Taitapu, Ahuriri and Motukarara provide important mahinga kai and wāhi taonga. To the far eastern end of the lake, at Kaituna, the Waikakahi Pā of Tutekawa is situated.
Tutekawa, together with his son’s pā Hakitai at Taumutu held the mana over Te Waihora until the arrival of Ngāi Tahu
forces.

Between Waikakahi and Hakitai, lays Kaitorete with its many hundreds of umu and mahinga kai sites. Te Puna o Pohau indicates a junction between Wairewa and Taumutu. Travelling on toward Taumutu the habitation site of Kaikanohi can be located, before reaching Te Arariro – the lake opening site where Te Waihora is periodically opened to the sea.